Sita was a test-tube baby, says UP deputy CM

NEW DELHI/LUCKNOW: UP deputy CM Dinesh Sharma said on Thursday evening that Sita’s birth in the “Ramayana” was evidence of a “test-tube baby project”. In less than 24 hours, the top BJP leadership asked him to exercise restraint. 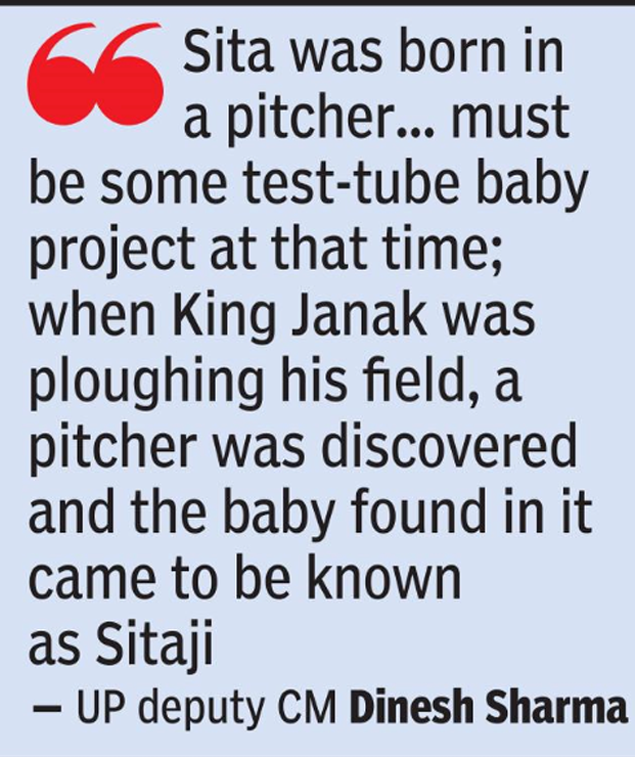 BJP general secretary Bhupendra Yadav spoke to Sharma on Friday following instruction from the top leadership. A senior BJP functionary said Yadav conveyed to Dinesh Sharma the brass’s displeasure over his comment. “The party believes that Sharma’s views are uncalled for and he should not have made such a statement,” the BJP functionary added.

There were protests in Bihar and Nepal against Sharma’s remarks and effigies were burned at a few places. “His (Sharma’s) views are highly insensitive and the party has made it clear that it strongly disagrees with him,” aBJP functionary said. A day before Sharma made the remark on Sita, he created another controversy when he said that Google existed in ancient times.

“Your Google has started now, but our Google started a long time back. Narad Muni was the epitome of information. He could reach anywhere and transfer a message from one place to another by saying Narayana three times,” he said at an event in Mathura on Wednesday.

BJP monkeys speak from their bumm to gain attention.dalitawaaj

The deputy CM claimed journalism started during the time of the Mahabharata, citing Sanjaya’s description of the war to the blind king Dhritarashtra sitting in Hastinapur. “If this is not live telecast, then what else is it?” Sharma said. This is not the first time that a BJP functionary has embarrassed the party by making controversial remarks.